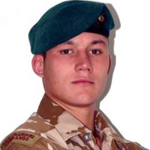 Marine Tony Evans died during operations in Afghanistan. He and Marine Georgie Sparks, both of J Company, had been conducting a foot patrol to the north-west of Lashkar Gah in Helmand province. Marines Evans and Sparks had moved on to the roof of a compound when, at around 0900 hours, there was an attack by insurgents armed with rocket-propelled grenades and they were badly wounded. Both received immediate medical attention and were moved to a secure location before being put on a helicopter to be transferred back to Camp Bastion.