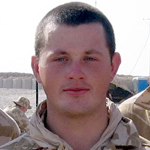 42 Cdo. RM
Marine Richard Watson died during operations in Afghanistan. Elements from the UK Task Force were patrolling to the north of Now Zad, a district in the North of Helmand, when they came under attack from Taliban forces. During the contact Marine Watson was hit by small arms fire and fatally wounded. An emergency quick reaction helicopter along with a full medical team was immediately dispatched to Now Zad. Marine Watson was then evacuated to the UK hospital at Camp Bastion, where he was sadly pronounced dead.