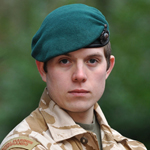 40 Cdo. RM
Marine Paul Warren, Charlie Company, was injured in an explosion when Patrol Base Airport Lounge was attacked by insurgents. Despite being given immediate first aid by his comrades, Marine Warren’s injuries proved to be fatal.
Paul Warren  joined the Royal Marines on 22 May 2006, and on completion of recruit training was drafted to 45 Commando Royal Marines, based in Arbroath, Scotland, joining on 26 June 2007.