Justice of the Peace (JP) 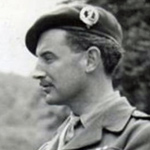 Lord Lovat first enlisted in the Scots Guards in 1932, leaving the army in 1937. Two years later at the outbreak of war he rejoined the Army in the Lovat Scouts. Lord Lovat was part of a small but elite group of men who formed the idea of a Special Training Centre, agreed on the location, and devised and implemented a course of training once it was approved. This became the first of many Special Training Centres, STC Lochailort.

The training took place in and around the camp at Lochailort, Lord Lovat's role being Fieldcraft instruction.