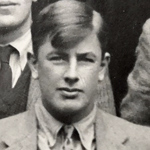 No 3 Commando
Lieutenant Peter Kenward, B.A., died during operations at Dieppe [1].
Gunner Peter John Kenward, late Cadet Sgt. Bradfield College contingent June Div., OTC, was commissioned on the 2nd September 1939 [2].
He joined No 3 Commando on the 17th August 1942, embarked with them for Dieppe on the 18th, and was killed in his landing craft on the 19th. Brigadier Durnford-Slater described him as "A fine young officer."[3].