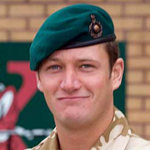 Corporal Marc Birch died whilst deployed on operations with X-Ray Company, 45 Commando Group, Royal Marines. The company was conducting an operation alongside Afghan National Army troops to dominate areas posing a dangerous threat to British forces and the local Afghan population. Whilst acting as Second-in-Command of the Quick Reaction Force in support of a company operation, Corporal Birch was killed by a suspected enemy suicide bomber.