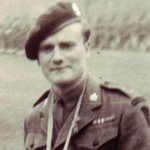 'Sandy' Carlos Clarke was commissioned 2nd Lieutenant on the 12th October 1940 [1]. He did his training at Achnacarry in late 1943 after which he joined No 4 Commando and fought with them at Normandy being wounded shortly after D Day and evacuated back to the UK.  After he had recovered from his wounds he rejoined No 4 Commando and took part in the Walcheren campaign. Later he was sent with the advance party of No 4 Commando to Recklinghausen [2].
After No 4 Commando was disbanded he remained in military service until the 2nd November 1947 when he relinquished his commission whilst serving as a Lieutenant with the 17/21st Lancers  on the grounds of disability. He was granted the honorary rank of Captain [3].
Post war he became a renowned racehorse trainer. In 1956 at his stables at Lambourn, Berks., he named three of his horses 'British Commando', 'Army Commando', and 'Air Commando' [4].
Sources
[1] London Gazettes Supp. 34971, page 6058.
[2] The Fighting Fourth author Maj. Jimmy Dunning.
[3] London Gazettes Supp. 38114, page 5184.
[4] Commando Association newsletter 23.
Photo of Commando in Gallery:
Yes
Archive pages :
No 4 Commando