YOUNG, Leilyn, Letter about his time as a US Ranger. 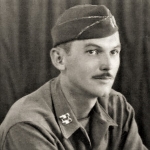 Leilyn Young, one of the first US Rangers to have Special Forces training by the new UK Commandos in WW2. Leilyn trained at the Special Training Centre, Lochailort, and then again at the Commando Depot, later renamed the Commando Basic Training Centre, Achnacarry. Both training centres were in Scotland, otherwise known as Commando Country.

This letter is a diary of events from when he left America, his arrival in Ireland, subsequent Commando training in Scotland, then onto North Africa. The letter was taken back to the USA by a returning fellow US Ranger. Leilyn Young not only went through a 4 week course at Lochailort in 1942 but also a 4 week course a few weeks later at Achnacarry with Colonel Darby and his other Rangers. This latter course ended on the 1st August 1942. Leilyn reached the rank of Colonel but was a Captain when this letter was written.

His niece Lisa McCollum recalls this about him " He was an incredible man, very soft spoken and one of the kindest and gentlest men I had ever met. I did not know him as well as I would have liked." Leilyn Young died on the 28th July 2004 and is buried at Arlington National Cemetery. Our thanks to Lisa McCollum for sharing her Uncle's letter with us