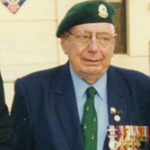 Private John Leech was awarded the M.M. [1] in recognition of gallant and distinguished services during operations in Calabria, Italy, between 28 August and 5 September 1943, a period in which he was also suffering the effects of malaria [2].
Promoted Sergeant, John 'Jack' Leech was awarded a bar to his Military Medal during operations at Normandy in June 1944 [3].
Citation for the award of a Bar to his Military Medal
On Queen Red Beach on 6 Jun 44 Sgt. Leech's Section Officer was wounded and he immediately took command and re-organized. Casualties had occurred in the boat.
During the counter attack on Le Plein woods on the morning of 8 Jun 44 he led the section with great distinction, and he himself killed several of the enemy, and his section took numerous prisoners. Although wounded he continued to lead the section until the operation was successfully completed. He displayed powers of leadership, military knowledge, and courage of the highest order.[4].
After recovery from his wounds in the UK, he returned to the Commando in France the following month in July 1944.[5].
In March 1952 he is recorded as serving in Cyprus as a Company Sergeant Major with the 1st Bn. Beds. and Herts. Regt. [6].
The death of CSM. J.E. (Jack) Leech, MM & Bar, of Dunstable, Beds., was announced in Commando Association newsletter 111 issued September 2000.
Sources
[1] London Gazettes Supp. 36327, page 257.
[2] National Archives file WO 373/ 4/159.
[3] London Gazettes Supp. 36679, page 4047.
[4] National Archives file WO 373/48/239.
[5] National Archives file WO 218/65.[more...]
[6] Commando Association newsletter 14 issued March 1952.
Archive pages :
No 3 Commando