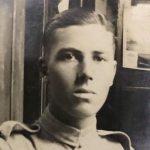 Rifleman John Beardsell, 3 Troop, embarked on board HMS Campbeltown for Operation Chariot, the raid at St Nazaire. During the raid he was wounded by enemy fire whilst still on board. He was transferred to a motor launch and evacuated back to the UK [1][2][3].
Service record [4].
16 March 1932 enlisted into the Rifle Brigade.
22 September 1933 posted Malta.
World War Two
Volunteered for the Commandos; attached to 3 Troop No.2 Commando.
March 1942 embarked on HMS Campbeltown for Operation Chariot , St Nazaire.
Wounded in left forearm and evacuated back to the UK. Hospitalised for 361 days.
24 March 1943 transferred to Royal Engineers.
6 June 1944 Operation Overlord, Normandy, and later operations in NW Europe.
9 February 1946 released from service rank of Sergeant.
4 April 1946 London Gazette announcement of a Mention in Despatches in recognition of gallant and distinguished service in NW Europe [5].
Sources
[1] British Army Casualty Lists 1939-1945 / National Archives file WO417/41.
[2] St Nazaire Society website.
[3] Storming St. Nazaire, author James Dorrian.
[4]+[Image] Mark Beardsell (grandson).
[5] London Gazette 37521, page 1685; errata in LG 37629, page 3274.
Notes
The sources @ [1] and [2] above record his rank as Rifleman. The source @ [3] records his rank as Corporal.
Photo of Commando in Gallery:
Yes
Archive pages :
No 2 Commando
St. Nazaire Commandos