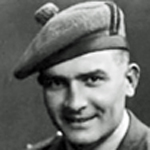 Second Lieutenant Morgan  Jenkins died during Operation Chariot, the raid at St Nazaire. He was one of the commando contingent on motor launch ML 268.
Morgan was the sixth of seven children born to Morgan and Mary Jenkins in 1915. His father was a plate layer at the Ynisfaoi Mine, Treherbert, South Wales. Morgan attended local schools in his younger years. Being a bright pupil he achieved a place at Brecon Boy's County Grammar School for his secondary education. Morgan's death at St Nazaire is recorded on the School's War Memorial.
This was the time of the Great Depression and, following his leaving school, Morgan, with many of his family moved to London to secure work. Unfortunately, due to all of Morgan's immediate relatives having since died, I have little information on this period of his life. However, Morgan's military record shows that he was a buyer for what I believe to have been a wholesale drapery company when he joined the Territorial Army (TA). I should explain that in the United Kingdom the Territorial Army is voluntary and for civilians who wish to take military training during evenings, weekends and holiday periods. Morgan joined the London Rifle Brigade of the T.A. in 1937 when it began to appear that war with Germany was possibly on the horizon.
At the outbreak of war he joined the Army. Over the next five months he was promoted from Private to Sergeant. In April 1940 Morgan was posted to the No. 5 Independent Company and joined them, with French and Polish troops, on the ill-fated operation in Norway. He subsequently returned in June 1940. Following his return he was posted to the No. 1 Special Services Battalion, which in turn became part of the newly formed Commando Force. In August 1940 Morgan married Doris Pooley. Morgan was now part of No. 2 Commando commanded by Charles Newman. Clearly Newman had a high regard for Morgan and arranged for him to be promoted from the ranks to 2nd Lieutenant, Welch Regiment. *
I understand Morgan revelled in the Commandos, where a man was judged by his skills and courage rather than his family history or which school he attended. His Captain, Michael Burn, records in his book  Turned Towards the Sun that on occasions Morgan would remove his officer's insignia, become one of the boys and join his old comrades for a night in the pub. Whilst discipline within the Commandos was more relaxed than might be expected within the army, training was exceptionally hard and only the most proficient were retained.
Much of the training took place in the West of Scotland. Morgan could perhaps be over zealous for Peter Stanley recounts in his book Commando to Colditz that on refusing to be captured during a training exercise, Morgan was inadvertently shot in the thigh by the opposing team. I was not aware of this previously.
The Commandos waited, not always patiently, for action, and finally it arrived with the raid on St. Nazaire. As is well known the prime object of the raid was to destroy the caissons of the Forme Ecluse Louis Joubert and associated machinery. Additionally, Commandos were to destroy the bridges linking the town of St. Nazaire with the dock area. Morgan's role was to lead a troop of men to defend the party designated to destroy Le Pont de la Douane. The majority of Commandos were transported to St. Nazaire by small wooden motor launches (ML).  Morgan was on board vessel ML 268 and on its approach to the Ancienne Entree it was struck by German fire. ML 268 burst into flames and exploded, resulting, unfortunately, in Morgan and his men being killed. Of the five, three are buried at Escoublac La Baule Cemetery. Two, including Morgan, have no known grave, but whose deaths are recorded on the Brookwood Memorial, Brookwood Military Cemetery, Surrey, England.
Sources
CWGC
David Tait, nephew of Morgan Jenkins
St Nazaire Society.
Notes