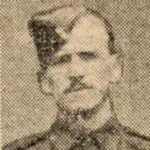 Lance Corporal Hugh Thomson died [1] during operations at Salerno, this date being that of the action on the hills by the village of Piegolelle (or Piegolette in English.) [2]
Extract from the Dundee Evening Telegraph - Wednesday 13 October 1943
"Commando Marine Killed :-  Mrs Thomson, 12 Walton Street, Dundee, has received intimation that her husband, L/Cpl. Hugh Thomson (34), Royal Marine Commando, has been killed. He was reported missing over a week ago.
Before joining the forces three years ago ho was employed as a cementer in the Caledon Shipyard, and with the Victoria Spinning Company as a jute batcher.
He leaves four children, the eldest of whom is 10. He is the youngest son of Mrs G. Thomson, 116 Blackness Road, Dundee. " [3]
Extract from the Dundee Evening Telegraph - Tuesday 18 September 1945
In loving memory of my dear son LCpl Hugh Thomson, Royal Marine Commando, killed in action Sept. 18 1943 aged 34. Two years have gone and oh how we miss him:
Some may think the wound has healed
But little do they know the longing,
That lies beneath a smile concealed.
Remembrance post by his loving Mother and Sister.
Sources
[1] CWGC
[2] No 2 Commando War Diary September 1943
[3] Dundee Evening Telegraph
[3] British Newspaper Archive (website britishnewspaperarchive.co.uk); The British Library Board.
[3] + [Image] © D.C.Thomson & Co. Ltd.
Primary Roll of Honour:
41RM Cdo. Roll of Honour
Photo of grave in Gallery:
Yes
Archive pages :
41RM Commando