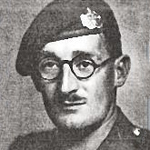 George Wheeler, a pupil of Godolphin School, Wiltshire, graduated as a BSc from Exeter University. He married in 1941. After enlistment he volunteered for the Commandos and was attached to No 2 Commando

Corporal George Wheeler, 1 troop,  was awarded the Military Medal for gallant and distinguished services in the field relating to his successful evasion from capture, making his way back to the UK via Gibraltar after the raid at St Nazaire in March 1942. He was accompanied by LCpl.  Richard William Sims , 2 Commando, who was also awarded the MM.[1]

Cpl. Wheeler was one of the Commando contingent on board ML 457 who disembarked at the Old Mole . [2]

On the 23rd April 1943 he was commissioned from OCTU as Second Lieutenant and posted to the Gloucestershire Regiment. [3]

In May 1957 Lieut. Wheeler MM was in the Civil Service posted to Malaya as Secretary,  Malayan Electricity Generating Board, Batu Road, Kuala Lumpur.  He and his family returned to the UK in 1966 settling in Lulworth. [4 +5]

The death of Lieut. George Russell Wheeler, OBE, MM, was announced in Commando Association newsletter 98 issued March 1994. In that entry it states against his name that he also served in 1 Commando Brigade and No 9 Commando.