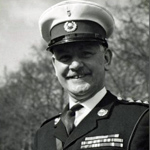 George Leonard Bream, or 'Percy', as he was known in the Corps, was born on June 1st 1919 in the hamlet of Buckworth, Huntingdonshire. He was the middle son of a a family of six, his father being a farm labourer. After leaving school with a basic education he moved to his eldest sister's home in Luton where he at first worked as a market trader, and then in a gent's outfitters. In 1938 with talk of trouble in Europe he joined The Royal Marines. In 1944 he joined the newly formed 48RM Commando after successfully completing his training at the Commando Basic Training Centre at Achnacarry.

Percy was a Sergeant in the Signals Section of 48RM Commando and took part in the D Day landings on Nan Red Sector of Juno Beach, and subsequent push into France.On the 31st October 1944 he was with 48RM Commando as they embarked their landing craft for the assault on Walcheren on the 1st/2nd November. With the war concluded he decided to make the Royal Marines his career.

Having returned to Wales where he completed his first training, he married Beryl, his wife of nearly 65 years. In the following years Percy saw service in numerous different Commando Units. He was well known as one of the youngest Sgt. Majors in the Corps, a position he very much enjoyed. He became Corps RSM and was awarded the BEM in 1956.

At the age of 38 and with a daughter Suzanne and a son Malcolm he somewhat reluctantly took a Commission which again took him all round the world and brought recognition and promotion. Percy's illustrious career end with the rank of Captain at the age of 50. After subsequent jobs at the Old Bailey and at Portsmouth Dockyard Vetting Service, he finally retired at the age of 60 in the early 80's. Percy and Beryl had 4 grandchildren and 4 great grandchildren.