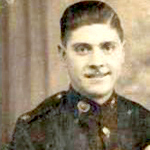 Corporal Frank Goodenough, 'E' Troop, died during operations at Breville in Normandy [1].
Extract from the 45RM Commando War Diary 11th June 1944
At 0415 hrs the enemy shelled and mortared our positions heavily, causing some casualties.  At 0515 hrs an attack was opened on 'E' Tp but was driven back.  Until about 1030 the enemy kept up a continuous barrage of mortar and shelling.  'A' Tp was detached to No 3 Cdo as a fighting patrol.  In the afternoon and evening the enemy kept sending out patrols to probe our positions but were all driven back with heavy casualties.
A large patrol of 3 Offrs and 100 Other Ranks commanded by Maj I.N.N. Beadle [more....] went on to BREVILLE.  Patrol successful killing a great number of Germans [2].
Extract from the book "The Story of 45 Royal Marine Commando
11th June D+5 - A Fighting Patrol to Breville.
At 0200 hrs a Fighting Patrol, led by Capt. I.N.N. Beadle [more....], raided Breville. Much confused fighting took place and casualties were inflicted on both sides. Troop Sergeant Major H.J. Caiger [more....] was wounded for the second time in the leg, but refusing attention, went on to lead a successful assault on a machine gun position.
The Patrol returned just before daybreak bringing all our wounded back with it. Unfortunately two men, Corporal Newman [more....] and Corporal Goodenough, (both of 'E' troop), died soon after reaching the First Aid Post" [3].
Sources
[1] CWGC
[2] War Diary transcripts on the Pegasus Archive website.
[3]  Page 30 of The Story of 45 Royal Marine Commando.
Registers of Reports of Deaths - Naval Ratings / National Archives file ADM 104/131.
Births registered Isle of Sheppey Kent, July, Aug, Sept 1918.
Primary Roll of Honour:
45RM Cdo. Roll of Honour
Photo of Commando in Gallery:
Yes
Photo of grave in Gallery:
Yes
Archive pages :
45RM Commando