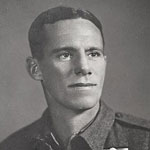 Lance Corporal Bob Tait, No.11 Commando 8 Troop [image in gallery], attached to Layforce, was awarded the Military Medal [1] in recognition of gallant and distinguished conduct during operations at Litani River, Syria, 9/10 June 1941 [2].
On the disbandment of the Commando he joined 'L' Detachment S.A.S., and promoted Acting Sergeant.  Sergeant Tait M.M., was awarded a Bar to his Military Medal [3] for his gallant and distinguished service in a raid on the Axis aerodrome at Agedabia resulting in the destruction of  37 enemy aircraft. The raiding party consisted of one Officer, Sgt. Tait MM, and two OR's [4].
He is also credited with designing the winged dagger badge on the S.A.S. beret, with Col. David Stirling creating the words [5].
Sources
[1] London Gazette 35316, page 6088.
[2] National Archives file WO373/27/37.
[3] London Gazette 35799, page 5142.
[4] National Archives file WO373/46/41.
[5] IWM interview (reel 2) with LSgt Robert Bennett, M.M., 'L' Detachment SAS .
[Image] Bob Edwards / CVA Gallery entry [view...].
Notes
First and middle name as in LG entry @ [3] above. Seen elsewhere reversed as Robert Duncan.
Photo of Commando in Gallery:
Yes
Archive pages :
No 11 Commando
Special Air Service