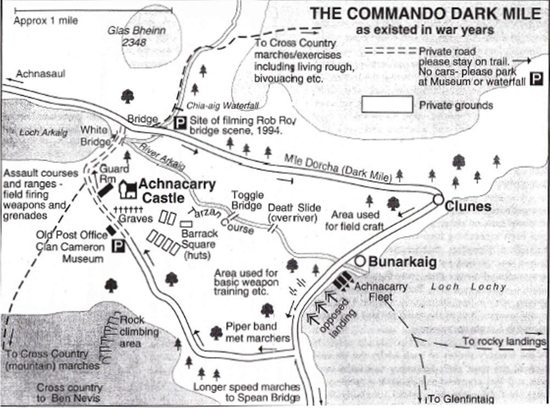 A good map of the various locations of training described on our archive.

Trainees were introduced to their first speed march on the 2nd day of the course. A gentle 5 miles around the Dark Mile in under an hour. This first march was followed by other weekly jaunts each followed by an additional task

7 miles under 70 minutes followed by digging a defensive position

12 miles in under 130 minutes, followed by a drill parade on the square

15 miles under 170 minutes, followed by assault course and firing. 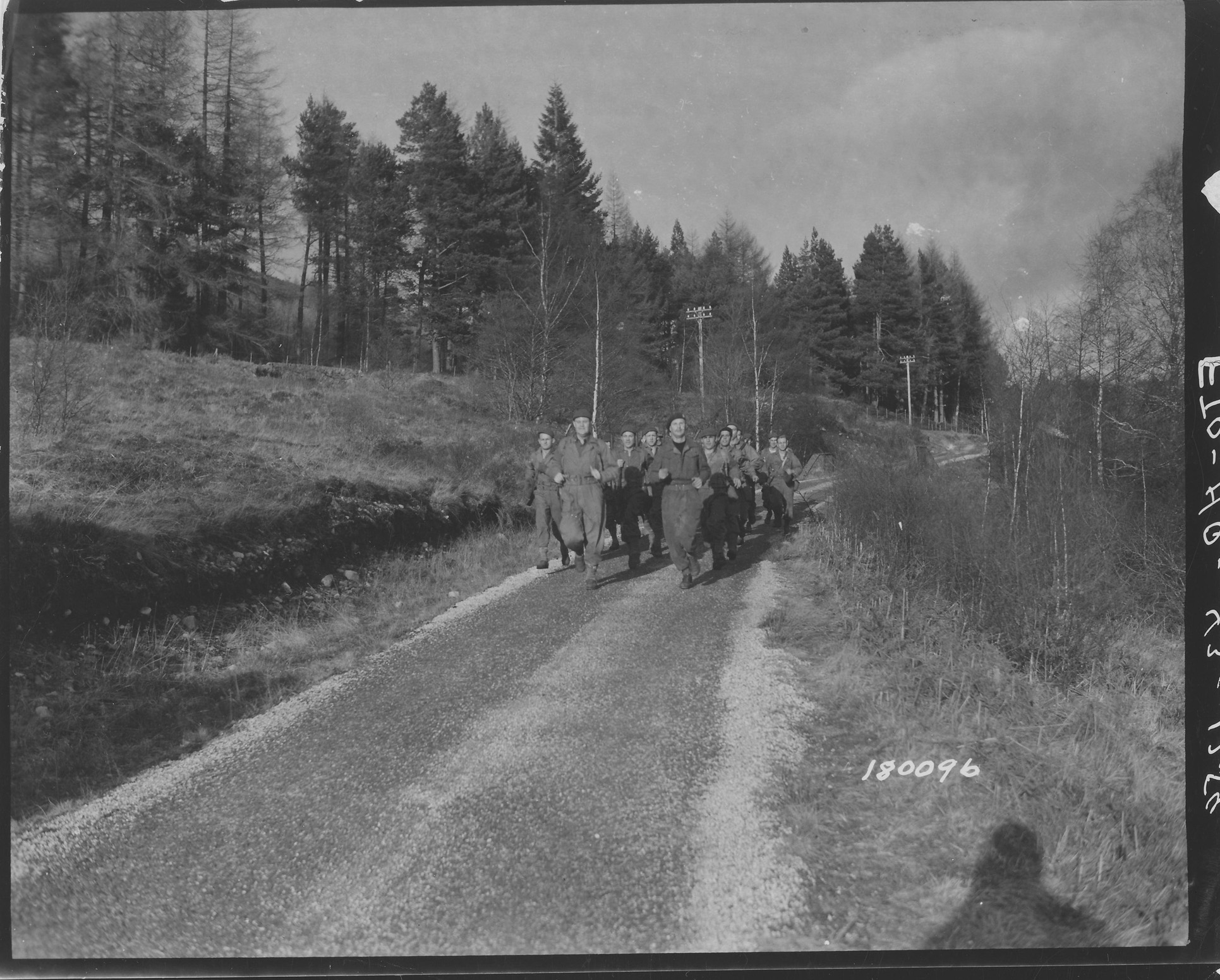 These times were only basic guidelines with Troop leaders expected to aim for better times according to the fitness of the trainees. On all speed marches everyone was expected to help flagging comrades keep up. All Officers and men were expected to help out in the task of load sharing for flagging comrades. Instructors were tasked with leading by example rather than by bullying. They verbally encouraged and helped the stragglers. This was a fundamental and significant feature of Commando training.

Located in the area between the River Arkaig on the opposite side to Glas Bheinn Mhor past the Chia-aig waterfall and forest (nb. this walk area is currently closed due to hazards).

Quite different to speed marching on open road, cross country marching would be better known today in modern Commando parlance as 'yomping'. Even the formation was different. Single file, rather than the columns of three in the speed marches, and led by an Officer or an NCO, on a compass bearing or picking his route from a map. The leader also set the pace. Over heather and swampy moors, through glens and across shallow burns and deep and fast flowing rivers, up and down mountains. In all weathers throughout the year, and with no special clothing or equipment other than standard army issues. Dressed in FSMO and carrying rifles the going was tough. The need for observation at all times was paramount as snipers and ambushes were laid on by Instructors, and as always, live ammunition was used by this 'enemy'. 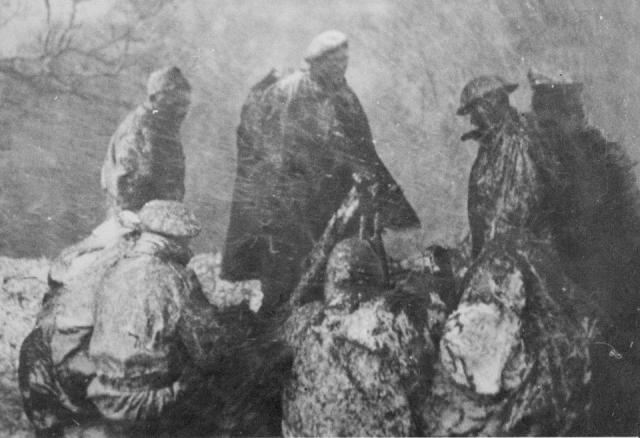 The cross country marches were developed into 36 hour schemes so that the trainees slept out and learnt to make the best of any shelter, or use natural materials to construct simple bivouacs. They also had to cook their own meals and this is where the 'Me and My Pal' system came to the fore. One man prepared the 'bivvy' whilst the other got 'cracking on the grub.'  This is where their survival training from Achnacarry's CSM 'Ossie' Moon was put into practice. Alongside the River Arkaig Ossie would describe the basic principles of building to provide shelter from the rain, wind, and cold. How to live off the land, how to procure all kinds of food, animal and vegetable, and prepare and cook the same on a wide range of improvised fires.

Located on the opposite side of the road leading up to Achnacarry and the Post Office, and away from there. It was also the route for cross country marches to Ben Nevis 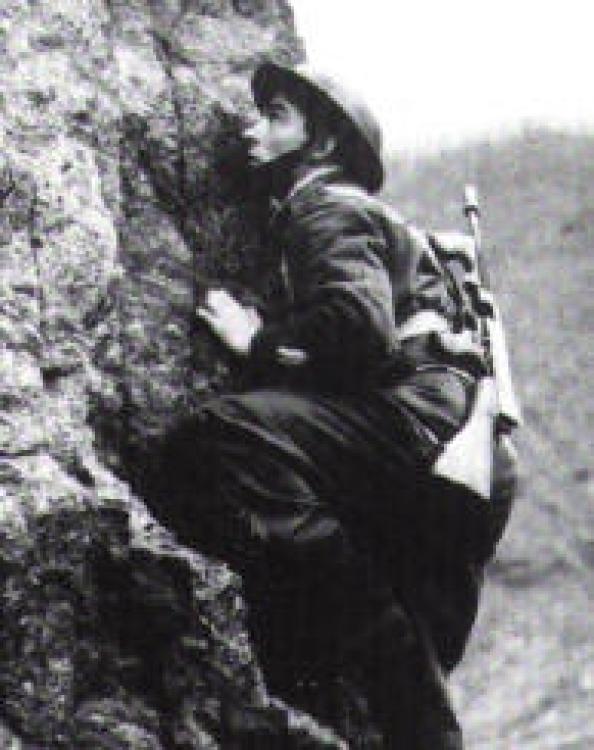 Located in the area near to Loch Arkaig. 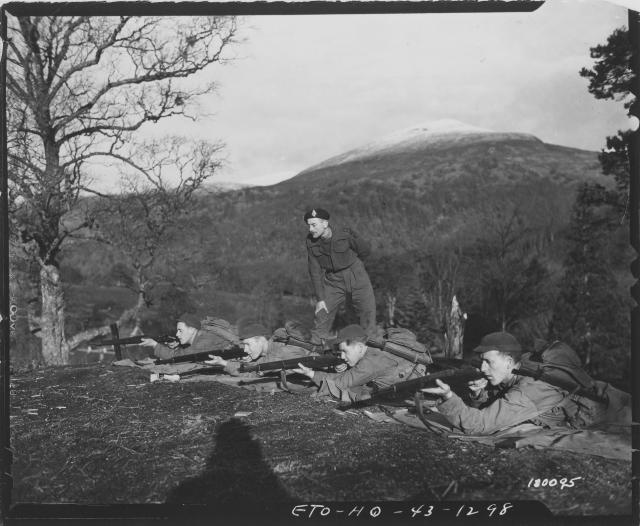 More time was devoted to weapon training and firing practices than any other single subject for obvious reasons. This training was the responsibility of the WTO - Weapon Training Officer. Captain 'Wally' Walbridge was the original WTO, followed by Captain Ken Allen, and later Captain 'Spud' Murphy. The basic instruction consisted of a thorough revision of Rifle, Bren gun, Thompson sub machine gun, Boys anti tank rifle, Piat, Revolver, and Grenades. Followed by plenty of handling practices and lots of firing. Some introductory instruction was given on the heavy weapons such as the Vickers MMG and the 3" Mortar, but it was elementary as more detailed instruction on heavy weapons was given at the Holding Operational Commando, or once at their operational Commando, if and when they passed their basic training at Achnacarry. They were also given instruction in the use of enemy weapons, and those of our major ally, the USA. Basic instruction on mines and demolitions was also given, but it was basic, as specialist demolition courses were available elsewhere for Commandos when needed for specific missions. 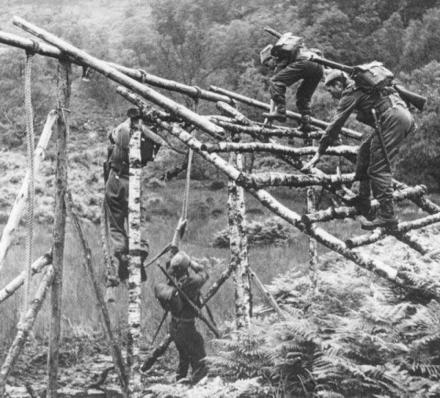 This consisted of what was known as the Death Ride and the Toggle Bridge  Both were located along the banks of the River Arkaig between Achnacarry itself and the Boat House at Bunarkaig.

The toggle rope was a piece of equipment all commandos carried. About 4 feet in length it had a piece of wood at one end and a loop at the other.

It was a simple matter to thread the wood between the loop. If needed several could be joined to gether to form a chain as an aid to scaling walls. Many could be linked together to form a toggle bridge strong enough to support half a dozen men and all their equipment at a time. As part of the training a toggle bridge was set up between the two banks of the River Arkaig.

The Death Ride or as later some called the Death Slide was the idea of Lt. Alick Cowieson, nicknamed Alick Mor (Alick the Mighty), who at the time was an instructor at Achnacarry. One end of a climbing rope was tied to the top of a tree on one bank of the Arkaig, with the other end tied to the base of a tree on the other side. The rope was then pulled taut. A distance of about 50 feet across the river, the descent being from a height of about 30-40 feet above the river. The recruit would then climb to the top of the tree, thread the wooden peg of his toggle rope through the loop thus making a complete circle of rope. This was then placed across the rope that was stretching across the river. so that the two loops at the end of the toggle rope now dropped on either side of the outstretched rope. Putting their wrists through the loops and twisting them securely and then holding onto the toggle rope above. Then by kicking with their feet against the trunk of the tree they were off. 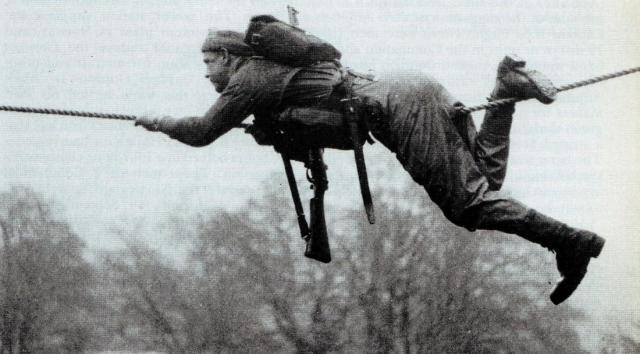 The remainder of the tarzan course consisted of ropes spread across the tall beech trees in the wooded area linking each at heights of about 30-40 feet. On these the men would learn cat crawling - torso flat on a single strand of rope with one leg extended backwards and the foot positioned over the rope, the other leg dangling down for balance. Then making your way along the rope. Additionally there were grappling nets set up where recruits would swing from a rope and let go to fall onto the grappling net.

Located between the banks of the River Arkaig and the area on the map marked Clunes. The primary brief for Instructors was to provide expert instruction on movement over all types of terrain by day and night, the use of ground cover to avoid detection by the enemy, camouflage and concealment, and methods of locating the enemy with both 'eye and ear'. The instruction was given by an Officer and 2 NCO's assisted with paractical demonstrations by the Achnacarry Demonstration Troop. The latter doubled as the CBTC Pipe Band ! It would be impossible to describe the training involved in a paragraph here. The Officer instructor in Field Craft during his time at the CBTC was James Dunning and he details this and all the other types of instruction givem at Achnacarry in his excellent book 'It Had to be Tough' - a must read for anyone interested in Commando training. 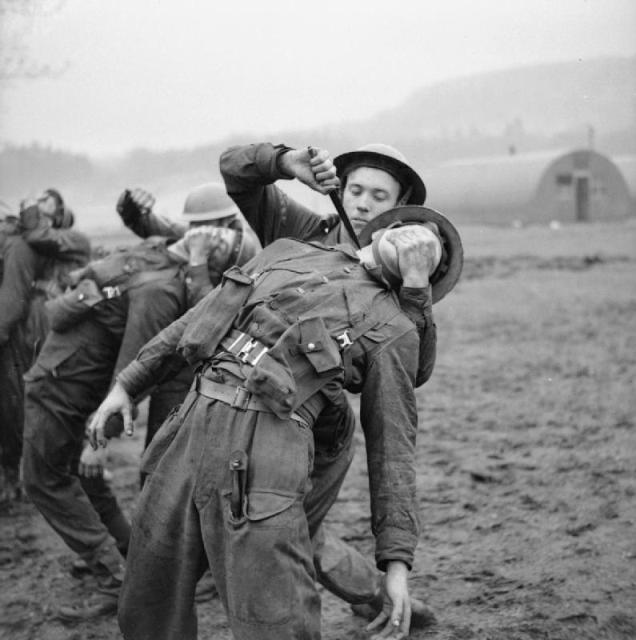 Training in unarmed combat and close quarter fighting took place near the main camp by the Nissen huts. At STC Lochailort this type of instruction was based on the techniques of Messrs Fairbairn & Sykes. At the CBTC training was delivered by the PT instructors Sgt Stanley 'Sonnie' Bissell and and Sgt Roy Bellringer, and led by CSMI Alex Frickleton.

Bissell, one of the first of the Police intakes to the Commandos, was accomplished in the art of boxing, wrestling, and judo. Photo depicts training in the use of the Commando fighting knife.