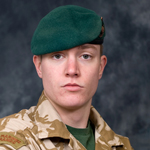 Marine Anthony Hotine, Alpha Company, died during the early morning as a result of an explosion which occurred when Alpha Company was conducting a joint reassurance patrol with the Afghan National Army in the area around Patrol Base Jamil, in the Sangin district of Helmand province.
Anthony Hotine started Royal Marines Recruit Training at the Commando Training Centre Royal Marines on 25 June 2007, passing for duty on 7 March 2008. On completion of training he attended the Defence School of Transport, Leconfield, where he gained his full range of driving licences, including his HGV driver qualification. Drafted to Yankee Company, 45 Commando Royal Marines, in May 2008, he deployed on his first operational tour to Sangin, Afghanistan, on Operation HERRICK 9. Having gained invaluable operational experience he specialised as a Signaller (Class 3) in July 2009, coming in the top third of his course. Known as ‘Tino’ to friends, in November 2009 Marine Hotine joined Command Company, 40 Commando Royal Marines, and immediately began Mission Specific Training for his second deployment to Sangin, Afghanistan, on Op HERRICK 12. He deployed in April 2010 as part of Alpha Company and was based out of Patrol Base Jamil.
[Source: MOD]
Primary Roll of Honour:
'Roll of Honour 1946 - 2020'
Photo of Commando in Gallery:
Yes
Archive pages :
RM Commando 1946 - present
40 Commando RM
Afghanistan